I know the Baz Luhrmann adaptation of The Great Gatsby opened in theatres yesterday. Did I go? Not yet. Will I love it? I will not say for sure until I have seen it, but the images of the costumes and such are not thrilling the fashion historian/1920s & 30s purist in me.  I do like electro-swing music and vintage/modern musical mash-up videos, so that part of the whole endeavour might not bother me.  In fact, I guess I will confess I rather like a video for Fergie and Goon Rock's song, "A Little Party Never Killed Nobody" I stumbled on the other day (it's one of several modern songs on the soundtrack I don't mind admitting I like---feel free to stop following me if this revelation horrifies you LOL).  Anywhooo, HAD I dressed up and gone to see the film on opening night, I might have worn something like the 1910s beaded belt from my shop (as a headband of course), along with my 20s/30s marcasite ring that I got in Montreal, and probably the 20s black velvet & white fur trimmed jacket over a black 20s dress).  Instead, I was in my pyjamas last night and this morning making a Canadian Prairie treat known as FLAPPER PIE for a Vintage Victrola & Croquet Picnic Party this afternoon (I also made a gluten free lattice top triple berry pie). Photos of the picnic are forthcoming.... 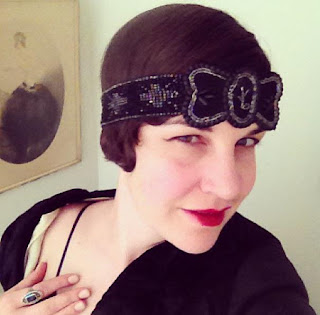 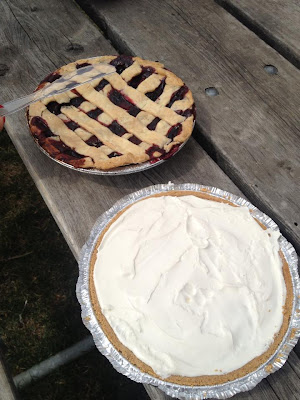 Love the belt head band.Purist wise I don't think I'll be happy with it but I think it'll still be some good eye candy.

But like you said we won't know for sure till we get out and watch it.

I'm not sure Baz Lurman wanted it to be authentic. His films are so so supersaturated and intense, I suspect he'd take the aspects of the archived dresses and jewellerey he liked best and then hype them up, douse them in bling and run with it! I did read an article about the jewellery design process, since they got access to Tiffany's old designs and revamped many of them. Personally I'm really excited, I love all his films except Australia and I have high hopes for this one! Might go while away the afternoon watching Strictly Ballroom, in fact...

Love your belt headband (and those pies look pretty fab too!)

Can't wait to see this, but going to wait until it's been out a week or so so the cinema's not ram-jammed :)

Not seen it yet, but I will. Have to say after the trailer I'm far from having a positive vibe.

P.S.Fergie's voice sounds good, but for me the whole thing doesn't work, I really don't like that beat.

I haven't had a chance to see it yet, and doubt I will while it's in theaters (still in recovery mode after last month's surgery), but am thoroughly eager to watch it when it comes out on DVD. I always really enjoy Leo in period roles, and suspect he'll make for a marvelous Jay Gatsby.

While I'm not thrilled about the costumes, a lot of my friends have told me that the film is really true to the book. I love The Great Gatsby, so I'm hopeful about the movie. Plus, I have a ridiculous girl crush on Carey Mulligan. ;)

I've been eying that belt from your shop for a while now, and I think it looks just as great as a headband!

Interesting to hear and read all the buzz around this film! I hope the thematics of the book don't get lost (it IS a tragedy, after all...and I'd hate for the film to just end up being a 2 + hour ad for Prada and Brooks Brothers). I used to teach college english lit., so when I'm watching the movie, I'll be doing so from both a fashion history and literary-adaptation perspective.

I really want to see it. I love the novel (need to read it again before I see the film) but I'm definitely going to go into it expecting more of a fantasy adaptation of both the book and the time period rather than a historical drama.