I've been asked before what inspires my vintage style; while I love to pore over 30s magazines the way many modern women devour Cosmo, I will admit I particularly love to go back over 1930s fashion moments in the movies.  One of my perennial favourite fashion-centred films is the aptly named movie, Fashions of 1934.  While it's rather frothy in style and content, I do love that this is a movie that deals (albeit in a rather screwball manner) with a problem still prevalent in the modern age: idea plagiarism....in this case, design theft in the form of fast fashion makers producing cheap unauthorized knockoffs of designer originals.  Without giving too much away, one of my favourite scenes in the film involves William Powell's con artist character employing a hidden camera inside a cane to snap pics of Parisian original fashion designs with the aim of using them to produce cheaper knockoffs.  Anyway, some of the fashion is simply SWOONSVILLE! Emily of Livin' Vintage screencapped some of the other Orry-Kiely designs appearing in this movie :).  On the subject of plagiarism, I think Vintage Vixen's recent blog post about citing online sources of images, ideas, and texts is an important little discussion (not only because I've come across images of myself or from my blog/flickr/shop used without my permission or without attribution).  At the same time, I'll admit to sometimes not being as meticulous about source citation as I should be, so, one of my resolutions is to be more vigilant about clearly and properly crediting and linking to sources appearing on my blog that are not my own (Bette Davis stills are from here, btw!). 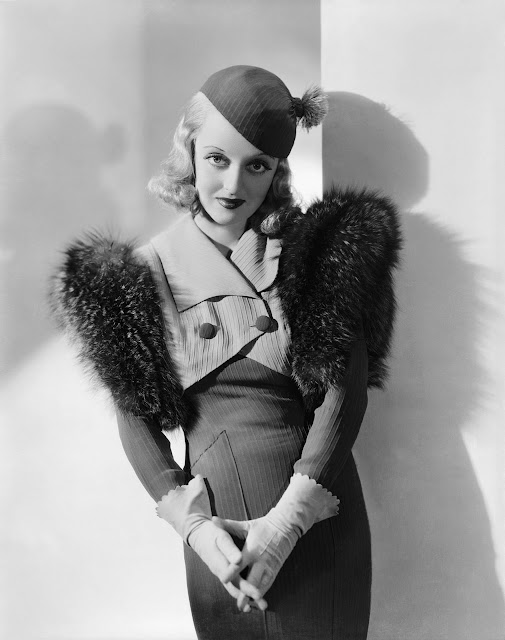 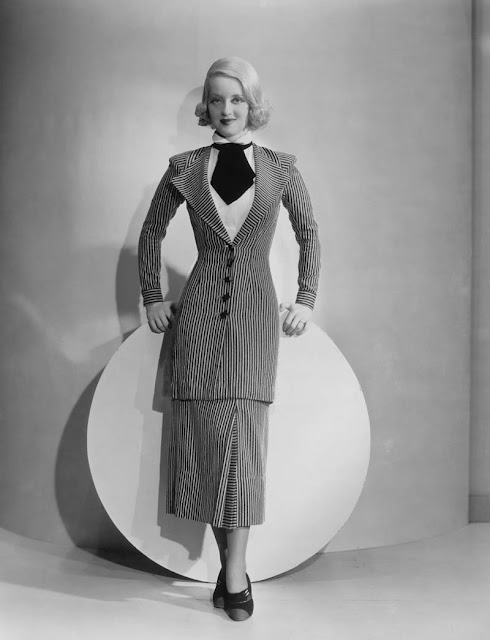 Oh wow, from what I can see the costumes really do look swoonsville! Can't wait to watch it.

oh it really does look fabulous. And those eyes - no wonder people have written songs about them! x

I just saw this movie a couple weeks ago for the first time, when William Powell was the TCM star of the month. It was faboo!!

holy smokes that top picture is really something isn't it! I was looking through a "home notes" magazine I have today, it's from 1936, so wonderful!

I want to see this so bad! Its not on Netflix so I will try Youtube! Love Powell! Great post-LOVE your blog!!! xox

Wow, I think I'm going to have to see this film! What killer outfits.
-Andi x

One of my favourite films. 34 was a good year.

I have regular segments in my blog on what is out there for sale and I like to add people's items from their Etsy stores in my 'Favs of the week' to actually help get their lovely items out there and sold too via the members I have. The pics are always linked to their original source which takes the viewer back to the shop.

I hope my doing that is deemed to be ok.

Can't wait to hear what those of you who haven't seen this flick yet think of the fashions!

Chellzapoppin, link backs are great, I think. That's definitely one way to site sources! I think Solanah and others are more referring to images that are not in any way tagged/linked/sourced back to their original owners/blogs/websites, etc. :)

I'd heard of this film, but I need to track it down and devour it now!

I think I feel a 30's fixation coming on since multiple Thin Man screenings over the holidays...william powell, cute lil' bette before she was a force of nature! And the black and white fashions. oh my. Thanks for the inspiration!

It's a fabulous film. One of my favourites :) I used to long for this come on Sunday afternoon TV when I was child each year and, as soon as I could obtain a copy as an adult, I did! I think it is one of reasons I loved vintage style so much from and early age, that and my Nana, Violet.

I'm not to bothered if people use photos I have found and that are my own, if I am I say so at the time of posting. It's my whole post replicated that I can't stand.