Check this out!  Earlier this summer, I blogged about my elation over discovering the actual pattern image which had been the exact one used by the talented Depression-era seamstress who had made the 1930s dress that I eventually purchased from Dear Golden.  Today, I happened upon another serendipitous connection between an image depicting 1920s McCalls "Pierrette" costume patterns and an image of a real-life gal who apparently had used the very same pattern to create her own Hallowe'en costume in the 20s!!  Then, as now, there is something so inspiring about seeing someone take an image and pattern and translate it into the real world.  I think this gal did a great job.  I wonder what colors it ended up being!! 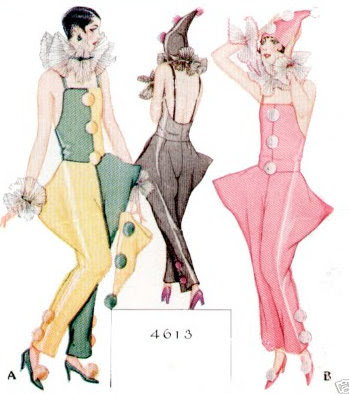 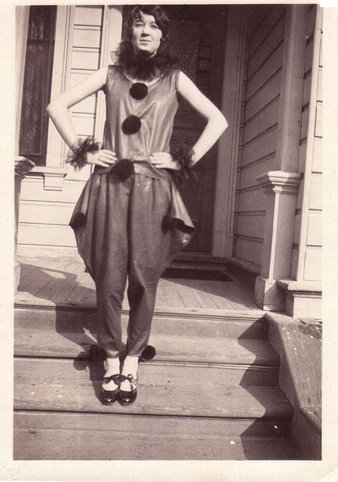 **squee!** I love things like that!!
I was flipping through a McCall magazine from 1936 and found the suit I have for sale on my etsy store. MUST find that pattern!!

oh wow! I love it! It's so great to see a pattern made up and I was wondering how that one looked in real life!

That's amazing!
Making clothes is one thing I wish I could do. Think I may need to add it to my ever growing list to join the learning how to knit and lindy!

That's great! I have a pattern for one of these from around the same time. I think it might be a couple of years older, but this makes me want to test it out.

You're very good at picking patterns out in photos. I'm very impressed.

Oh I love this, and I want to be a harlequin for Halloween and that is great inspiration!