Since the thermometer mercury is starting to drop, I thought I would post about some cozy vintage clothing.  Today's subject (inspired by stylish Cowichan wearers Dakota of Sweetheart of the Rodeo (below left) & Tasha of By Golly, By Gum, (below right), among others:  Cowichan Sweaters. 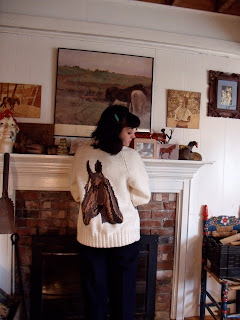 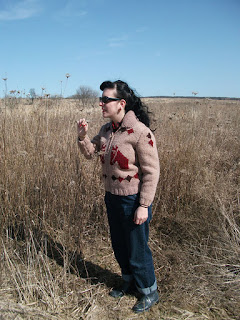 Although some may more often associate them with The Dude in The Big Lebowski, the Cowichan sweater has long-standing roots in Canadian West Coast First Nations history and culture (being a Canadian who lived on the West Coast for ten years, you can see why I'm partial to the subject).  Apparently, after sheep were introduced to the Cowichan Bay area by settlers, missionary sisters (The Sisters of St. Anne) shared with local Salish women their methods wool production and knitting.
According to one Cowichan Bay history site, "Mrs. Jeremina Colvin instructed them in the art of making Fair Isle patterns learned in her native Shetlands," so traditional Cowichan sweater construction may be said to bear this influence.  However, as has also been pointed out, "The Cowichan people quickly adapted their own designs to the knitting they learned from white settlers." This is reflected in the fact that "many sweaters have traditional Salish motifs on front and back, often killer whale, salmon, eagles or deer.  Traditional Cowichan sweaters were known for their water repellancy thanks to the wool yarn used.  They typically have a more muted colour scheme consisting of cream together with grey and/or oatmeal and/or dark espresso browns.
In the 40s and 50s, Cowichan sweater styles were taken in a different direction by producers of "novelty" sweaters with kitschy or sporty motifs. While fun and often cozy, these sweaters are often made of cotton and/or acrylic yarns, making them less water resistant than authentic Cowichans. 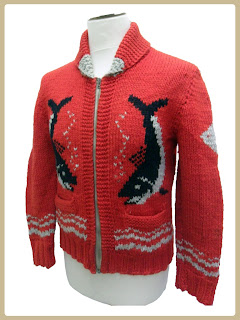 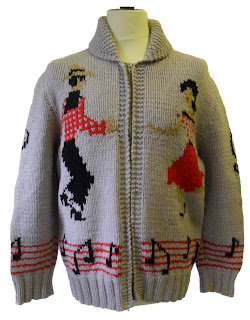 Love love! I can't wait to make my sailing sweater, I'll have to do posts on that and I totally have the pattern (two versions actually) for the square dance one. I've only seen about 5 minutes of the Big Lebowski so I had no idea a Cowichan featured in it! I always associate them with a) my Dad and b) Paul Gross in Men With Brooms....mmmm...you should post him in his blue curling sweater ;)

Ah, thanks! I am already stalking more of these beauties on eBay... they're too cute and so warm. It's interesting to hear about their history, too; those original Salish designs are just gorgeous!!!

I love the fish sweater! Too cute!

I've always wanted one of these sweaters! Especially with a horse or western motif. Someday!