Shall We Dance? My Magical Mystery Anniversary Night Revealed

Thanks for playing along with my previous "teaser" post!  Finally, I can reveal some snaps of a day and night I will never forget!  To celebrate our 5th wedding anniversary (though we've been together for 9 years), the mister and I decided to head to the "city" (Toronto) for an afternoon of sightseeing and then a very special evening Get ready for a photo-heavy post... 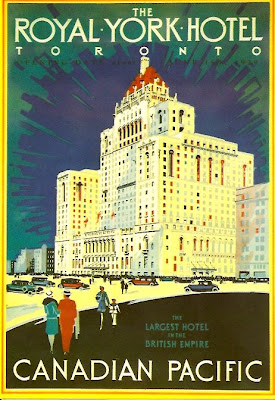 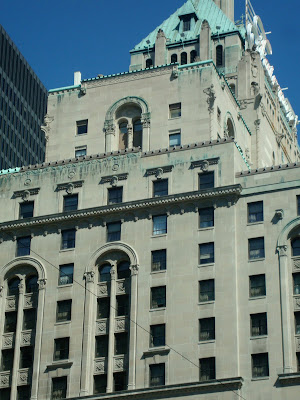 First, we checked in for a night's stay at the beautiful Royal York Hotel, which, when it opened in 1929, was apparently "the largest hotel in the British Empire" (great online deals for this time of year)! 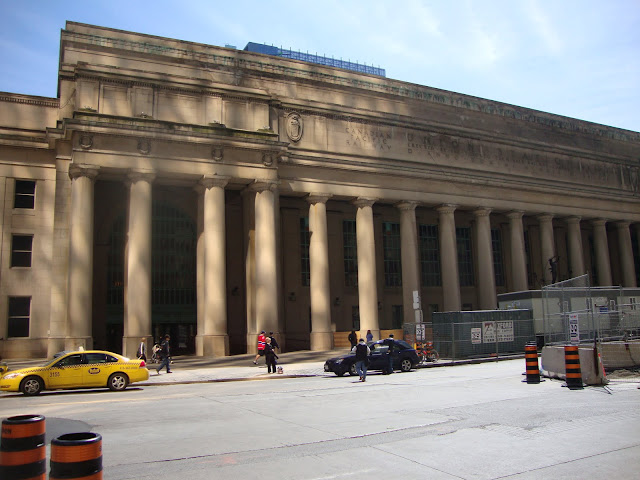 The hotel is right across the street from the beautiful Union Station (though it may look less beautiful in this pic, as there is some construction work going on). 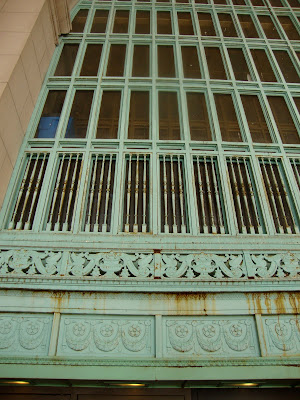 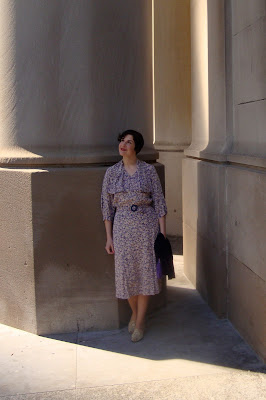 We spent the afternoon looking at some beautiful architectural details.  I'm a sucker for verdigris and grand columns! 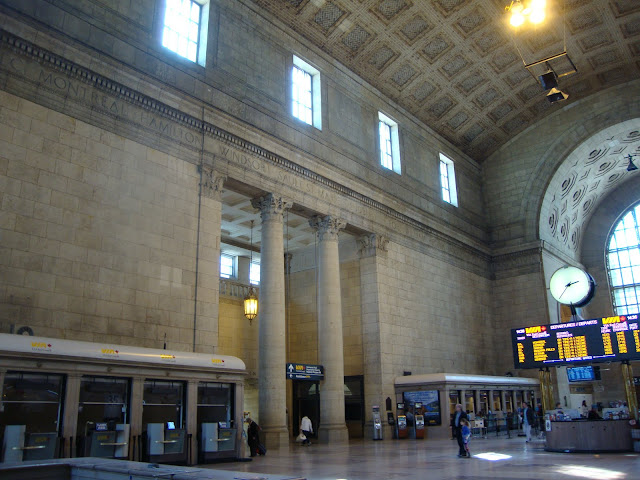 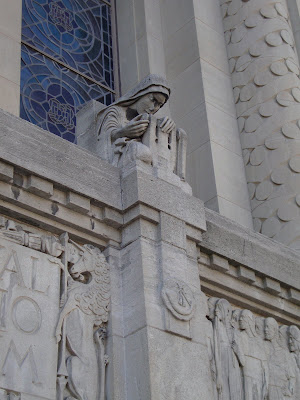 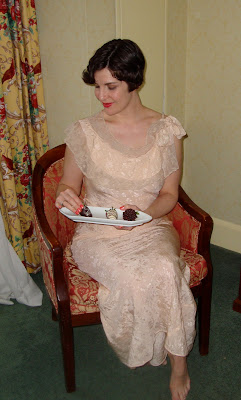 After the station, we checked out some other architectural delights, like the Royal Ontario Museum (ROM).  Late in the afternoon, we retired to our suite for some much needed relaxation AND some chocolate dipped strawberries, which the hotel sent up with their compliments and wishes for a happy anniversary. 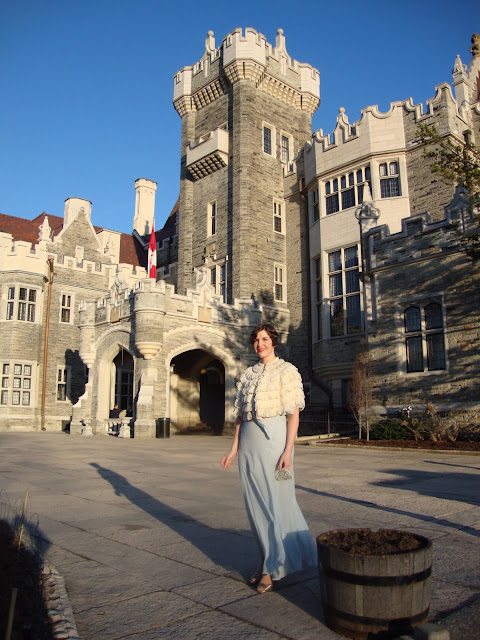 FINALLY, the time arrived and we headed to our main event, an evening of dancing to big band music, provided by the Toronto Big Band, at Casa Loma, a grand estate that is known as Toronto's castle! The dress code instructions were "Dress to Impress,"an event worthy of the amazing 30s gown + capelet jacket I had bought over a year ago from Exquisite Bones and my 30s hairpin crocheted capelet I had bought from another on Etsy around the same time. 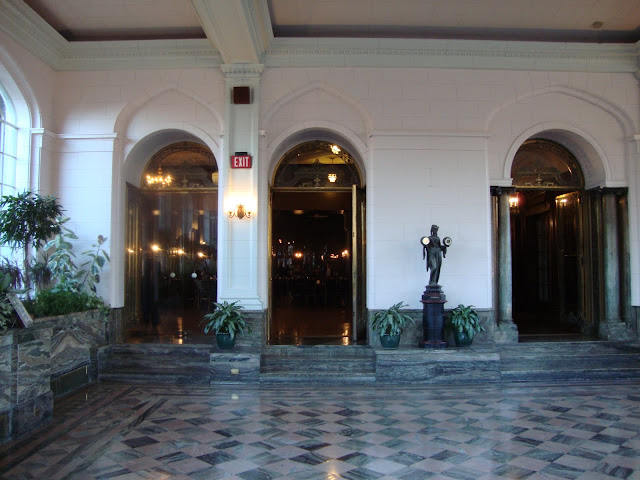 Words cannot express how beautiful this venue is.  After entering down a long panelled hallway (which I wish I had photographed), we bee-lined for a peek at the famous conservatory, which is So so gorgeous, with its marble floors and alcove with fountain! 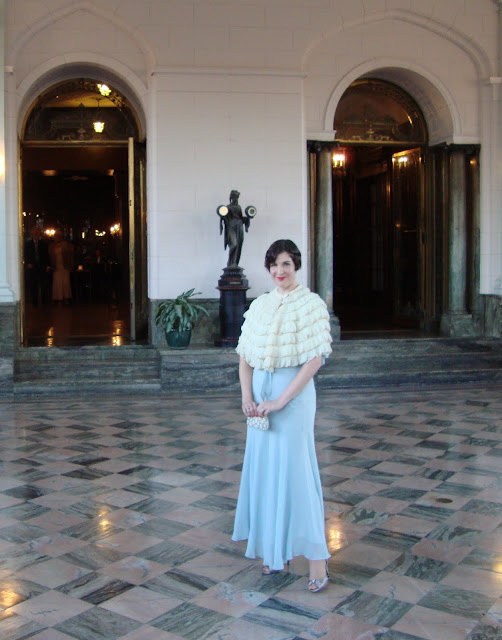 I have a feeling this beautiful floor has borne the weight of many lavishly dressed party-goers its history! 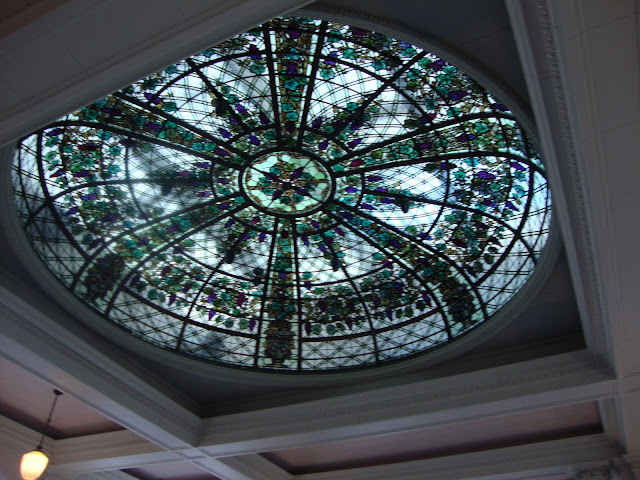 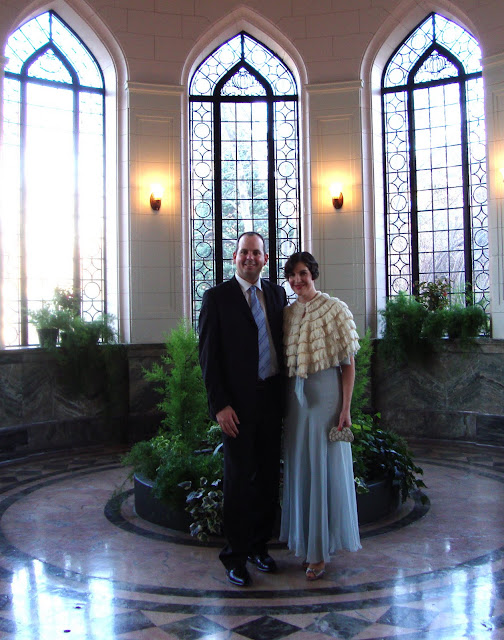 Requisite anniversary couple shot.  We're standing in front of the fountain so you can't see it. Oops. 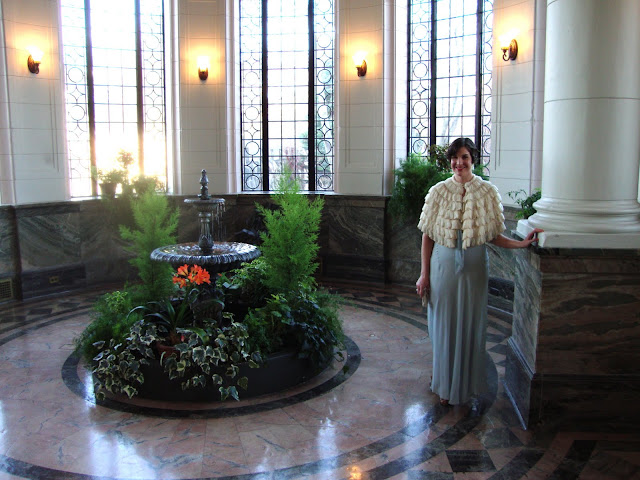 There, now you get a better idea of what was behind us.  What a romantic setting! 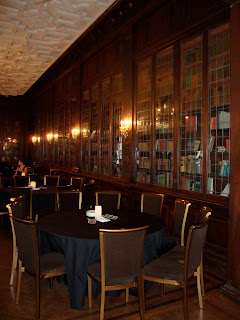 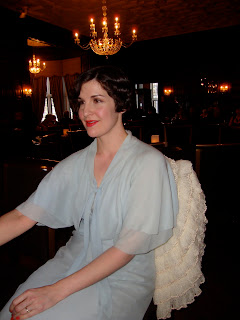 After exploring the conservatory, we headed to the glass bookcase-ensconced"library room," where numerous tables were set up, so people could sit, relax, and nibble on lovely antipasto and dessert platters when not dancing.  We ended up sitting at a table with a couple who was actually celebrating 50 years of marriage.  WOW! A peek at my gown with the warmer hairpin capelet off. 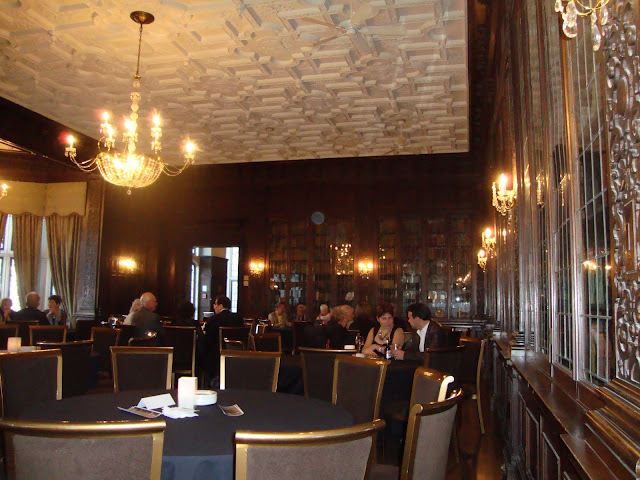 A view of the library room from our table before many guests had arrived yet. 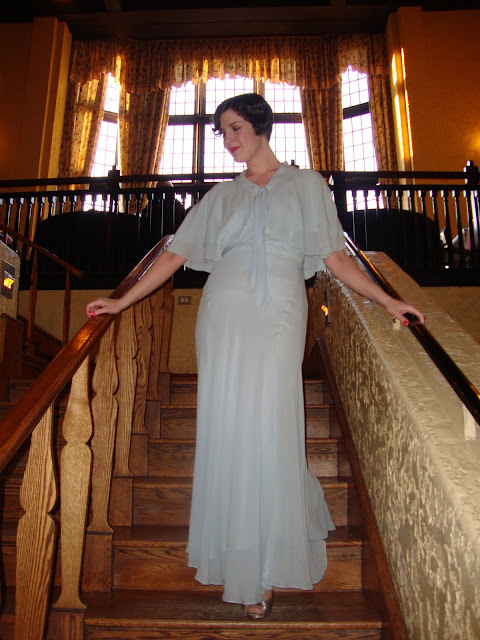 I would not be worthy of my self-assigned Baronial title without a dramatic staircase photo!  This gown and capelet set was the dreamiest thing to wear and foxtrot in! I can't believe how sturdy all pieces of this set were and still are! 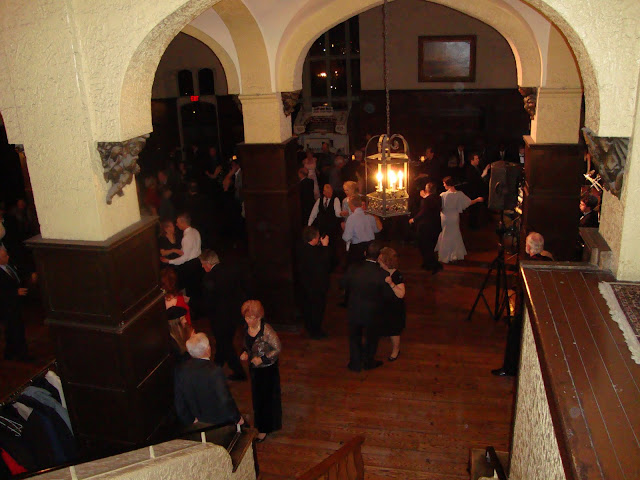 The music provided by the Toronto Big Band couldn't have been more perfect (click here to hear some of their tunes).  I think we danced for three hours! Here's an action shot (taken by the mister, at the top of the staircase), showing me doing the cha-cha (well, pretending to!) after a sweet older gent asked to take me for a spin! 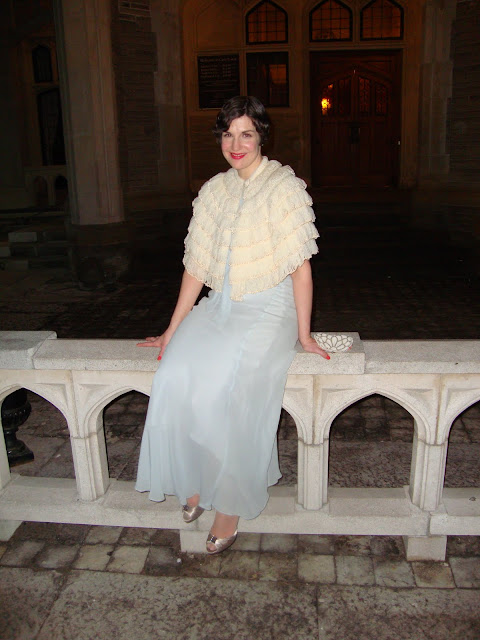 Waiting for a cab in the glow of the moon, after a night of dancing on the clouds! 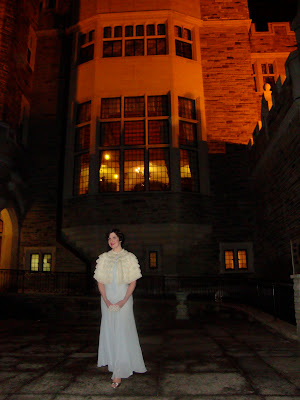 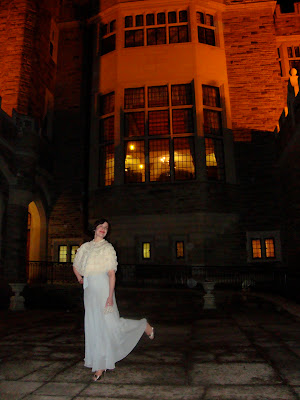 The cab took a while, so I hammed it up in front of the castle, which, by night, looked rather Dracula-esque. I hear Murder Mystery nights are hosted here sometimes. MUST look into this. We'll be back for sure!!
Posted by BaronessVonVintage

Looks like a lovely evening! And wow, that dress!

Remembering an old episode of Being Erica where she worked at Casa Loma, awesome!

Wow you look so radiant- absolutely beautiful. What a wonderful way to celebrate your 5th wedding anniversary- by the way my grandpa would say five years married, but 9 Years with overtime- the overtime always makes me chuckle! T x

How awesome! You look like you belong at the 'castle'!

You dress looks fantastic! Sounds like a wonderfull evening too.

And I completely agree with how beautiful Union Station is. I worked in Toronto for a few months and looking up at that impressive ceiling every morning was the best part of commuting (actually it was the only good part...).

Congratulations on your anniversary! What a fabulous celebration.

Out of curiosity, does your husband ever dress vintage? You're so passionate about it, so I'm just wondering if he's into the clothes, or maybe the music or movies? I like hearing how everyone relates to this hobby/lifestyle. :)

You look captivating, and the castle looks magical. Happy Anniversary!

Oh! What a wonderful anniversary weekend!! You look lovely (as always)!

You both look fantastic, what a lovely evening, much better than camping.

What a wonderful anniversary. Lovely dresses and an evening of fun. What more could a gal ask for?

wow ! what a wonderful and romantic trip ! and you look so so so pretty !!!

THANK YOU all!! It was a dreamy night to remember for sure!!

Betty Lou: you know, I have only caught bits of BEING ERICA. That's so interesting that there's a Casa Loma connection!

Kate: I used to have to ride a train to and from work every day in Vancouver. Riding the gotrain reminds me of that daily grind. Not fun...but I agree: at least TO has a much more beautiful station!! In the end, I am so happy not to live in a big city anymore. Makes visiting much more fun. You can take in the best bits and then leave when it gets to hectic or stressful!

Tickety Boo: 9 years over time...hehe, I'll have to tell my husband that one. :)

Hi, Beth: Great question: we've tried to find my husband some vintage (fedora hat, jacket, etc) and we just have had no luck with FIT. He isn't as obsessed as I am with vintage/1930s, but he's definitely grown to love many of my favourite Fred & Ginger and Myrna Loy/William Powell movies that I do. He also loves the music (esp. "My Canary Has Circles Under His Eyes") and the dances (he's more in love with foxtrotting and waltzing than I am!). He's completely absorbed by the Mildred Pierce series right now. He is not only infinitely patient with me when I drag him to all sorts of vintage clothing sales and stores, or supportive of my various social whims, but he has become quite passionate about history and the arts (when we first met, I was the "arty" one, into history, literature, film studies, etc, while he was more athletic and business minded...now, I'm doing many more athletic things I would never have done (like surfing!), and I'm running my own business, while he's the one initiating plans to go see plays and signing us up for ballroom classes, because HE wants to dance like Astaire :)

Miss Rayne: you must know that I laughed so hard when I read your last post!!! And you're right...glam-ping is much better than camping!!

what a beautiful, and successfully magical evening you had. The blue gown is so special- I'm glad you found the perfect occasion for it!

ooohhhh...soooo lovely! You looked STUNNING! I loved seeing you dancing. The venue was perfect! happy anniversary to both of you!

The entire thing looks so perfect and other-wordly :) Love that castle

That gown is amazing and you looked FABULOUS in it! What an amazing anniversary :) Those are places to add to my list for whenever I FINALLY make it to Toronto for sure.

Wow, what a fabulous evening! You looked beautiful, too ~ what a perfect outfit. :)

My, you look beautiful. Dreamy!

The dress and capelet is just gorgeous! You look so stunning, just like a 30s starlet. The venue is of course dreamy, I hope that I'll one day get the chance to see it! =)

Oh you look perfect! Love the gown so much, suits you very well :)
Looks like you had fun, totally marvellous :)

Baroness you're BEAUTIFUL!!! and your gown,also!

I wish my boyfriend would invite me to places like that...not that he is not perfect...but we don't have the same tastes! (it's funny because he is into surfing and business...maybe I will change him for the best!!lol)
I also wish you a lifetime of happiness with your man.
Lexy

It's like a film set, and you're the Oscar-winning starlet floating along on your own red carpet!

Looks like it was an absolutely magical time, congratulations on your anniversary.

wow, I am so grateful for all your kind and generous comments, everyone!!!! Truly!!!

Wow Jill, it looks like an amazing weekend and you look stunning. You fit right in to that beautiful setting! Happy anniversary to you both xx

Congrats on your anniversary! That peek of blue in your teaser led me to believe it must have been somehow related to something like that. ;)

Looks like you had a wonderful time, and the photos are terrific. I think one of my favorites is the shot of you dancing taken from up the staircase. Really magical!

It looks wonderful, and you you lovely & elegant, a true Baroness!!

Happy anniversary! You look so beautiful! :)

Oh how gorgeous!! You look absolutely stunning; I love love love that capelet, how glamorous. It looks like an amazing and elegant time!

you two look beautiful, thank you for sharing such a lovely night out with us! :)

Happy anniversary! I'm so envious of all the glorious architecture - history is so short in NZ! Though we do have some lovely art deco stuff...

You look fabulous as always!

Thanks for your response! Sounds like you two are a great match - I love that you've inspired and encouraged each other to try new things! And I'm sure that you'll eventually find him some great vintage. :)

That sounds like an absolutely perfect night. What a GORGEOUS venue. And you look divine, of course. Happy anniversary. (And a braver gal than I, dancing in vintage. Hehe.)
-Andi x

Thank you ALL!! Andi, I had a moment of complete fear over wearing this gown set, but it came through perfectly (she's made of a light floaty rayon...if she was silk, I wouldn't have risked it).

wow, this looks like such an enchanted trip to Toronto! I would love to stay at the Royal York, maybe I'll do that sometime, even though I live here, just for fun.

Happy Anniversary and Thank you for taking a look at my blog.

Fantastic photos! Congratulations on your anniversary, you celebrated it so well!

Amazing shots!!!You look lovely with this dress and love your etsy shop!
http://chiccastyle.blogspot.com/

Wow, that blue gown was MADE for you! Seriously stunning. Happy anniversary!

I've been meaning to comment on this for a while but being poorly got in the way... HAPPY ANNIVERSARY! What a wonderful way to celebrate and you look divine :D x