So, since moving to "Eastern" Canada (Ontario) from the West Coast about 1 1/2 years ago, I look forward to this time of year, when the sugar maple festivals kicks off.  Today, for the second year in a row (but this time with in-laws in tow), we once again attended the Bronte Creek Maple Festival. As per last year, we were guided through the historical processes by which maple syrup was made by hosts dressed in period costumes and then peeked inside the beautiful Victorian farmhouse on the property and bought some maple candy made fresh in one of the "barns."  For the first time ever, I got to try Maple taffy made on ice, which resulted in a massively giggly, messy sugar rush (see last image)! Outfit deets for me: 1930s plaid hat and scarf, 1940s style overalls, navy peacoat I've had for so many years it can almost be considered vintage. Sometimes, I love being stereotypically Canadian, eh! 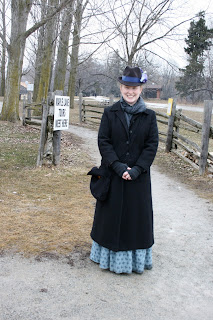 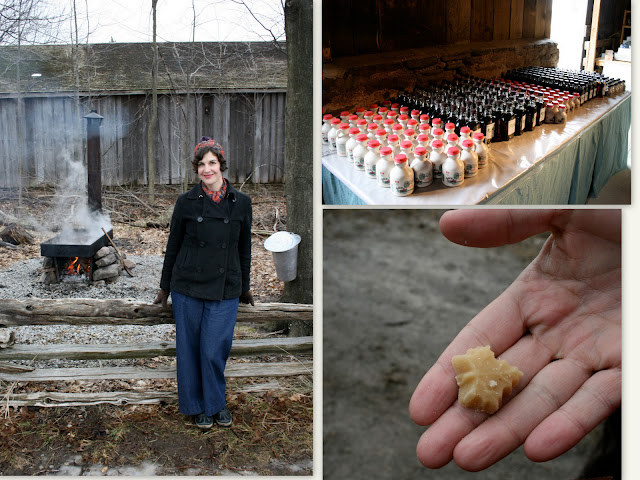 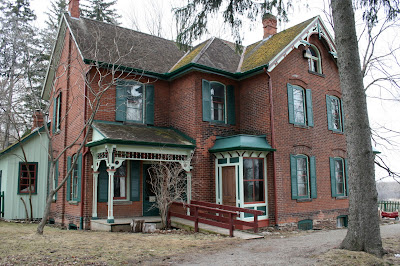 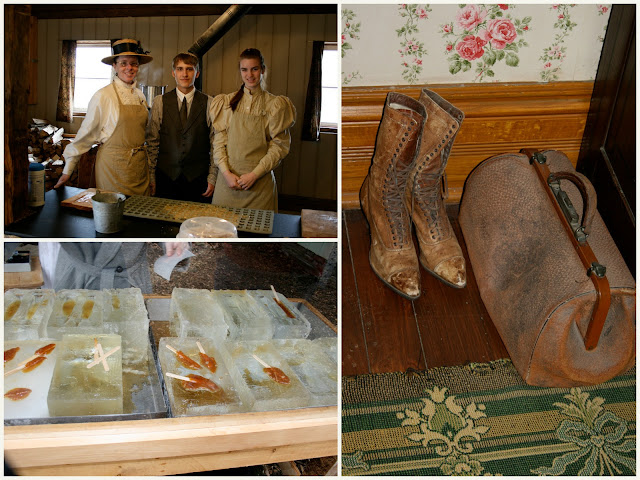 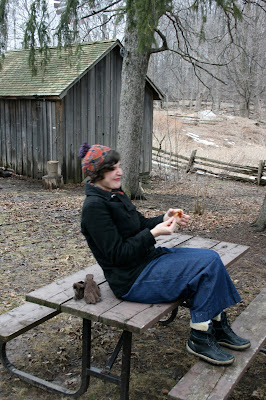 That looks like so much fun! Love the taffy photos they look absolutely delicious!

YUMMY, I love fresh maple candy, I couldn't get enough of it when visiting Montreal 4 years ago. I'm envious that you got to go to an actual farm to see it made!

Yay maple syrup! My grandparents live in Maine, so I always associate maple syrup with happy childhood memories. (Plus my grandpa makes some mean pancakes.)

Mmm, I LOVE maple syrup in all forms, especially fresh from a sugaring house!! As a Vermonter, I'm looking forward to sap season festivities myself, though unfortunately we don't have any adorable Victorian farms around here!

Oh my goodness, that looks like so much fun! The old brick house is just gorgeous and I love to see people dressed up in the fashions of the day. Those boots are great!
XOXO

I love maple candy for the taste. I loathe it for the diabetes it is sure to give me in later life. Doesn't stop me nomming it though when I get a chance!

So fun! I love your casual look too. Hooray Canada!

Ah, fun! The candy looks delish. The boots and the satchel are quite amazing too!

still feeling the effects of the sugar!! Good thing I only indulge once a year!! The brick house is really cool inside (the boots and doctor's [or is it an oversized Gladstone] bag was in one of the bedrooms). I did a post showing more detailed pics last year(I'll see if I can dig up the link)!

AnnaBananaCupcake: the interpreters in costume are always my favourite part! So fun!

I'd be so interested to see how the Canadian maple region compares to Maine or Vermont!

Ah, hence the sugary twitter updates yesterday! That house is gorgeous, but my favourite pic is the last one - it did make me giggle xx

Maple syrup festivals are always so much fun! I had plans to go to a local festival this weekend too but it was pouring rain :(

Dear Jill, this reminds me of one of my beloved Laura Ingals Wilder book, one of the first, where she describes the whole maple syrup process! Thanks for the post!

Kate, that's too bad! We had driving rain here during last year's fest, too! Funny how there can be completely different weather in different parts of Ontario (example: I only live an hour from Toronto, but often notice they have totally different weather going on than we do!)

Thanks, art deco dame, Riika, everyone! We had fun fun fun!!!

Diva: I used to LOVE those books (along with the Anne series, of course). Sometimes, I do love being able to immerse myself in the beauty of rural Victorian-ness, if that makes any sense!

Love all your plaid! We spent this weekend with family as well, but we didn't get to have any maple taffy.

Maple syrup always reminds me of Little House in the Big Woods, too! Looks like you had so much fun.

I really love that hat and scarf set of yours!

thank you Lauren and garofit! I do love my 30s plaids!! Now I want to go back and re-read Little House books!!!

What a lovely day out!! I just love things like this - we have lots of tourist attractions here in Wales where people wear the old costumes.

Oh, and I'd never heard of maple candy, how interesting!