I do apologise to those of my fellow bloggers who don't have HBO or who might be in a country not airing the 2011 Mildred Pierce series, but I have to gush about how absolutely ENTRANCED by this production I am after viewing Parts One and Two (there are FIVE).  What I'm loving is how the series fully immerses the viewer in the sights, sounds, colours, and fashions that would have been part of the every day milieu of many middle-class depression-era American women. Sure, the glitz and glamour of 1930s California as experienced by the wealthy of this era always stuns and mesmerises, but I have a much deeper and more personal connection to the life-stylings of the working folk shown in the early parts of the show (perhaps because of memories of my beloved grandparents, who were in their late teens-20s when the depression was on). Let me tell you I am not sure I was fully conscious through the two hours because I swooned so many times.

Sure, if you want to get really nitpicky, in my humble opinion (that you should feel free to disagree with if you know otherwise), some of "Mildred's" dresses and hats looked a little more 1933-35 than 1931 (and the subject of accurate clothing gets even trickier when I point out that according to one article, the fantastic costumer Roth, apparently "utilised styles from the late 1920s for the start of the series, since, put bluntly; ‘no one had any money to buy what was in the stores".  Sorry, don't see that in Mildred's brown ensemble that she wears several times in the first parts. Or am I off base here? 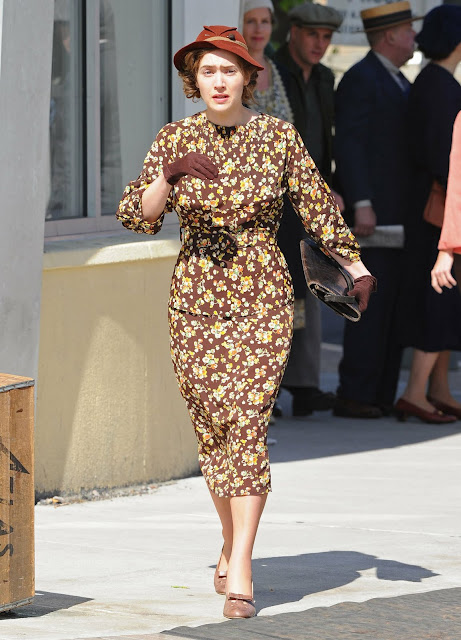 I thought the clothing the older neighbour lady played by Melissa Leo was wearing sometimes seemed more something a young co-ed of the era would have worn (example, in one scene, captured below, she wears an adorable trouser/playsuit that seemed a bit too "young" for her--though, I suppose if we look at photos from the era, "real" women often wore what they wanted, which is awesome!).  Lauren, I think you made or own this exact style of outfit, btw. It has the cactus and sombrero appliques on the pockets! Also, I was reminded me of your beauties, Nudeedudee! 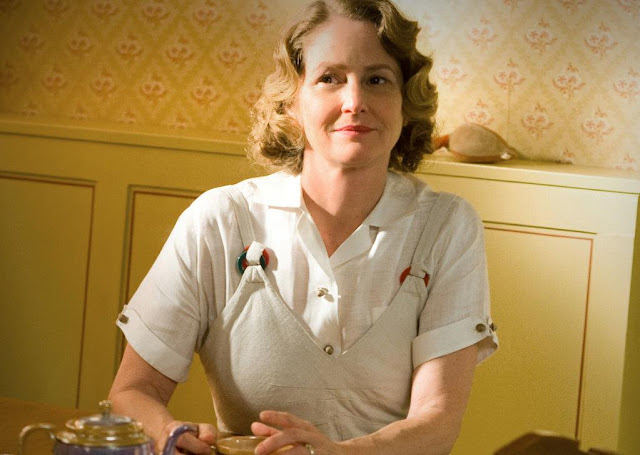 I also noticed that in a couple of scenes, Kate Winslet's character was wearing "MY" re-mix Anita shoes (hehe) (but hers are an off-white while mine are green) and of course an open toe slingback like this would not have been out yet in 1931, would it?  That's getting really nitpicky and I don't want to write that kind of review.

For the most part, I just got lost in the visual perfection of it all.  Each darling house frock, each knitted ensemble, each floral crepe dress was more fantastic than the next--and apparently, Kate Winslet has 66 costume changes over the course of the five parts, and there are over 2000 costumed extras so there's more to fashion "eye candy" to come!!!  I haven't seen any new stills popping up online to share with you yet, but I am wishing & hoping somebody does a scene by scene screen cap SOON because you have to see what I am talking about to understand what I am going on about.  In the mean-time, here is a link to a video about the "Making of Mildred."  I also thought I would share the Etsy Treasury I created in honour of this series (click the image to link to the actual treasury. Feel free to leave me a comment on it!).  Ok, off to rewatch the first two parts AGAIN! 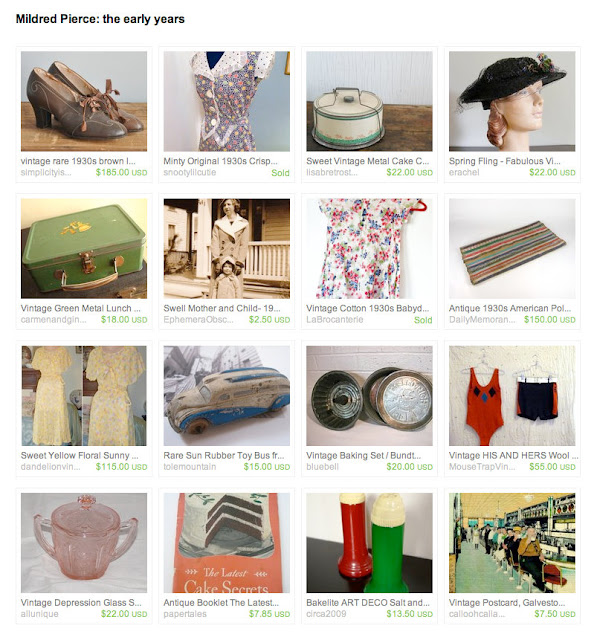 Wow- I haven't seen this yet, but if that's supposed to be 1931... lol.
Still, absolutely gorgeous costume, and totally something I'd wear, so I don't necessarily mind that it's not 100% accurate. Hey, at least it's 30s done well, even if not as early as they say :)

I couldn't agree more!! I didn't even notice these things until after I had started to google reviews and blogs about it!

Whoa! That is my jumper! I wonder if they got the real one that was on Ebay last year that I lost? Looks an awfully lot like it!

Great costumes from what I can see, definitely mid 30's looking. I hope this will air in the UK soon. Mind you, if it was true to early 30's style would probably turn into torture for me :) Mid 30's is pretty good though, and I can take it :)

Ohhh, I can not WAIT to see this!! Late 20s-early 30s Depression era stuff is always my favorite, though I can see what you mean about the mid-30s look in that tailored dress and hat! Still, any 30s is good 30s. How funny that you and Lauren are seeing "your" clothes on tv!

What I would give for cactus pocket overalls!!!!! AHHH!!! Also your treasury is dangerous to people's pocket books... just saying! LOL! :)

great post.... im jealous and sad cause i dont have hbo. oh, i LOVE you getting all nitpicky about the clothes! it is awesome how knowledgeable you are about this era. they should be consulting you, seriously! thanks for sharing about the show, i will just watch it vicariously i guess! p.s. i am LOVING the new white collared sheer dress you listed in your shop! GORGEOUS.
janine
honeyhivintage.blogspot.com

I loved the series! Can't wait for more episodes

Pandora, I'm with you....can't wait to see again!
Now that I've talked it up so much, I hope everyone ends up enjoying it, too!

iliveinmylab: I've realized that my fashion posts are a danger to myself and to others. Seriously, naughty naughty me!

honey hi: I'm glad you didn't find my nitpicky moments annoying. To be honest, I only "went there" in part because, in that video, everyone was going on and on about how exact and meticulous the costuming was, etc., and how perfectly they recreated 1931, I thought I'd stick my big oar in there and just point out that my sense of 1931 fashion was slightly different. Anyway, as Lauren, Dakota, and Garofit have mentioned, at least we're getting really good 30s!!!! Oh, thank you re: the white dress. She's a beaut!

I agree with Honey Hi, I think your 'nitpicking' is good. I am so excited to see this though, doesn't air till June in the UK and I have to go round to my boyfriends house to watch it hah. One thing I wished is that Mildred's hair was darker hah

I am looking forward to seeing this too. Kate seems to be doing mostly period things these days. I am not such an expert in clothing history to know what would be early or mid thirties. Maybe they had trouble getting hold of exactly that they needed in her size so went for the next best thing? Or maybe they didn't realise they had an expert or two watching :)

This is killing me. I hate that I don't have HBO. I'm going to have to look into camping out at my aunt's house this weekend to catch up!

Oh, I'm so sad that I don't have HBO. The second I saw they were re-doing Mildred Pierce with Kate Winslet I knew I had to see it. It really been get rave reviews, they better get it out on DVD fast!