It was fine to talk about light silky knickers during the temporary spring-like thaw we had here, but now we've got to cover up again 'round these parts, as we're back in SNOW, baby!  Feeling a little bit of cabin fever, I decided to try out something I have been wanting to show you: it's a later 1930s snow suit with matching (but separate) furry pixie hood! I had gotten it for myself as a Christmas present (I sort of half-heartedly put in a bid on it on Ebay and won!), but because it's just that little bit too short in the arms and legs, and just a smidge tight in the waist, I wasn't sure if I was going to keep it or not (still deciding).  Anywhoo, whether it stays with me or not, there's no denying it's a fun little ensemble! I did some research and discovered that in 1938 Schiaparelli designed a ski suit with poodle hood and red trousers (see below), and in 1936-37, Montgomery Ward sold a pixie hooded ski suit style, so in its day (1936-38) my snow suit was the height of fashion. Of course, husb. told me he thinks I look like I'm wearing a Christmas elf costume, which is why I have a special snowball waiting for him. Don't ever tease a snow baby. You're guaranteed to get a surprise snow "facial" or "face wash" as we used to call it.  Final note: I love how the Montgomery Ward catalog tells potential buyers that their suits were "ski fashions that don't need skis" and claims it's perfect for "all your winter activities from snow fights to marketing."  Well, I've tried the snow fights...do you DARE me to wear this ensemble into town on my day grocery trip? hehe! 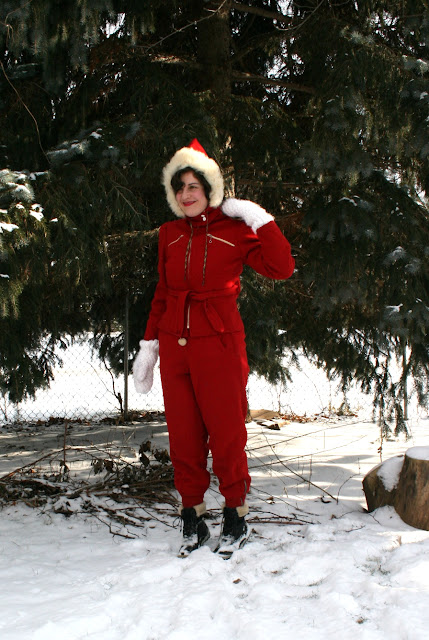 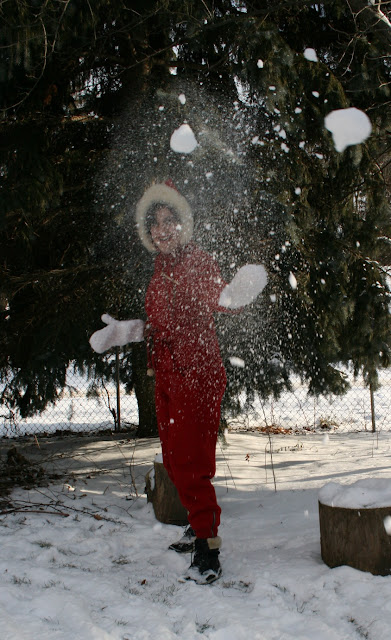 Thanks to you i now have a green suit from eBay that you wrote about in november i think :D It was a bit too tight but i have a blue one that i can use until i'm thin enough...

Ow, I want to be a snow baby too… no snow left here though, oh, and no red suit!
I don’t think I have ever seen an outfit as beautiful as that- wow- sigh! And you MUST keep it!
Tickety x

Oh my goodness, that has to be the most awesome snow suit I have ever seen!

Exactly the word: cute, no, it's übercute!

That's so cute! You're really lucky to get to see snow!

That is lovely and yes you must wear it on your grocery trip. You look really cute.

that hood is DIVINE!

I decided to just embrace cute (which I used to think of as the other four letter word) and had a lot of fun in this suit. THANKS everyone!

Betty Lou: ooh, glad you snagged that green one. Awesome!

So cute!! Maybe I need to invest in a vintage snow suit, seeing that we get a lot of snow here in Michigan too. :)

adorable AND stylish! I totally thought it was a vintage photo at first!!

seriously so so so cute!

milady, please explain to me how can you look so stylish and feminine even in the snow? Congrat!

Oh my! You must keep it you lucky gal! You look amazing and I for one am very jealous.xxx

Baroness, that is the cutest thing I have ever seen you wear. You MUST keep it. Or if not, sell it to me, please. I don't even care if it fits or not, if it entirely cut off my circulation I would still wear it.

Looking a positive treat!!! Wear it with pride :)

it's an adorable snow suit,and it reminds me a bit of little red riding hood! keep it!!

Utterly adorable! You can't possibly sell it, it's far too cute.