Falling Leaves and a Cavalier Scarf

In a previous post, I mentioned my obsession with the costumes in the movie, Gosford Park.  There is one ensemble in particular that I have been in love with for YEARS.  Essentially, it involves a long sleeved sweater, a tweed skirt, and a neck scarf with a dog on it.  Here are some stills to illustrate: 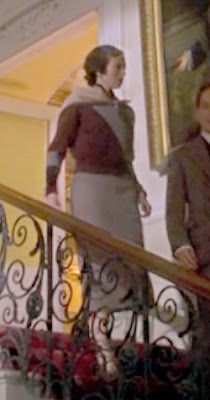 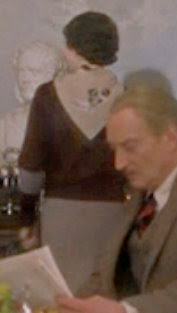 Yesterday, I decided to whip up a scarf of my very own, using a square of fabric I folded in half and sewed into a triangle, an image of a tricolor Cavalier spaniel I found on the internet (which looks identical to my own pup) and some iron-on transfer printer paper bought from the local office supply store, which I used to transfer the image onto the scarf with. Today, I mimicked the rest of the Gosford outfit, with the aid of a vintage 80s sweater I had bought from Sally Jane Vintage and my Puttin' on the Ritz 30s style tweed skirt. It was actually a very lovely ensemble in which to take a leisurely Sunday ramble amidst the falling leaves.  Of course, the late 30s shoes in the images were not the ones I did my walking in....those were brought along for the post-ramble outfit post...though I did have to a brief bit of rock climbing for a photo op ;) 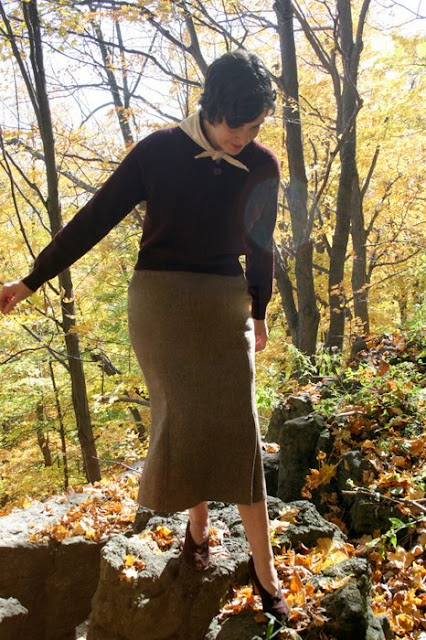 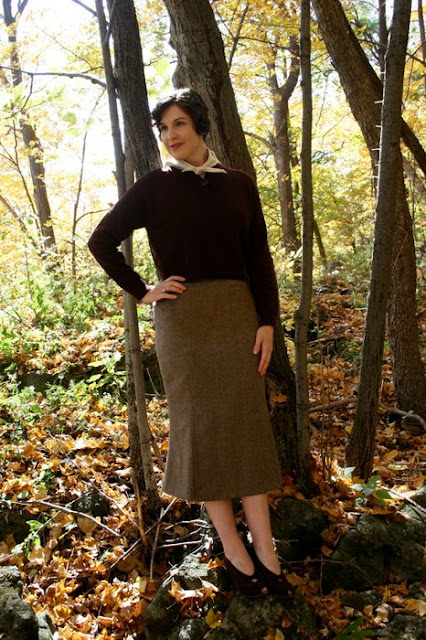 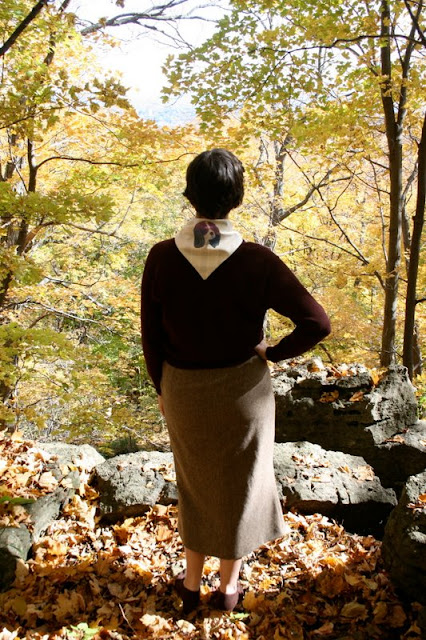 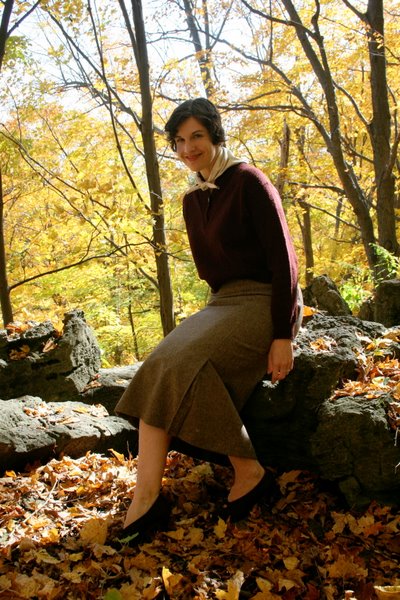 Cool! From the front there is a definite girl scouty vibe with the scarf, and from the back it a wonderfully cute surprise!

Oh my gosh, I LOVE this look! Your hair looks awesome, too.

Lovely! The scarf is adorable.

Oh, cute! I love little scarves like that! I will finally be seeing Gosford Park pretty soon, and after reading all your posts about it, I am really excited!

Oh, look at how adorable you are!!! I love the puppy face surprise! And as usual, I am envious of your shoes....

That's so clever! DIY projects are the best

Love it! So classic! The little puppy is too cute : ) That is a beautiful skirt too!

Out in the Fields said...

Love that idea! I've watched that movie 100s of times and never saw the dog on the scarf!

How very beautiful. That skirt shape is so elegant and I love the sweater colour. What fabric did you use to make the scarf? Such a wonderful idea - every dog lover should have one!

Adorable! And, best yet, you look much happier than any of the Gosford Park women!

You have matched it perfectly :)

Chelsea: thanks...interestingly enough, I tied the scarf using the "left over right, right over left" knot I had learned as a Girl Guide. Def. felt girl scout-y, but in a fun way!

Wearing History: Thanks, L! Ironically, I was feeling like yesterday was a particularly awkward hair day for me, so glad the photos belied my frustrations with various cowlicks and "wingdings." I am also still without my master bathroom (prob. for ANOTHER week), which means only using a small bedroom mirror to feebly attempt hairstyling with. Oh, misery :)

Thanks for all the kind words on the scarf, Bella,Pixie, Miss Tami Lee, Out in the Field, Eva Girl, Sarsaparilla. Mrs Exeter, I used a square of the same fabric I had used to make my 1934 blouse. It's plaid on the reverse and a neutral cream on the underside, so I sewed the scarf almost closed on the plaid side, then turned it inside out and stitched the little hole I had left closed. I like that there is still a hint of the plaid visible through the fabric, but it is subtle. In retrospect, I would have loved the look and feel of a silky scarf; maybe next time I'll go to the local thrift shop, get an unpatterned scarf and attempt something similar?

Dreamstress: thanks! You are right, I was feeling much happier than the Gosfork gloomies, probably because no one had been bumped off in my midst ;)

Many many thanks, LandGirl1980, Big Mama Retrospection, Katia, and thestreetfashion5xpro!!

I really love reading your blog, and have left a 'blog award' for you on my page at http://annieanniepancake.blogspot.com/2010/10/blog-award-3.html

Love it! Your DIY projects are some of the best!

Ahhh! You look amazing! I love it!

I love the way you 'play dress up' when you get dressed - I do it too, and it's so much fun to use your outfit as a way to pay tribute to a favourite character. It amuses me no end to walk around all day in what may look, to the casual observer, like an ordinary outfit, but is actually a private, fangirly joke!

P.S. Julian Fellowes (the chappie behind Gosford Park, but I'm sure you knew that!) has just done a new series that's currently showing on British tv. It's called Downton Abbey, it's set in 1912 and you'll LOVE the costumes.

Puttin' on the Ritz said...

Gosford Park is one of my favourites, too. Not only for the costumes, the story is so engaging.

You may enjoy the series 'The House of Elliot', if you can get hold of it. It's set in the 1920s rather than the 1930s, but the costumes are amazing.

There are none more stylish or naturally beautiful than you, baroness. Hands down.

Em, Q, Darlene, Puttin': I am humbled by your sweet compliments!

Bette on Toast, Puttin'on the Ritz: Am committed to watching both of these if at all possible. Thank you!

How clever! You have got this look EXACTLY x

ps I second Bette - I've been watching Downton Abbey too and it is excellent.

Wonderful photos. You look amazing. I love that look. I love the film Gosford Park.

I love your outfit, and the scarf it completely brilliant! Now I'm tempted to try something like that.

What a lovely outfit, you give me so much inspiration for my outfits!

I think you need to make and sell me a scarf!!!

xx mwahhhh beautiful as ever xx