I've been meaning to do a post on 1920s Egyptomania for a while; since we're possibly going to see the King Tut exhibit in Toronto this weekend and you lovely bloggers led me to a fabulous post on FIDM's blog about 1920s egyptian revival fashion, I thought I'd share my own little bits of research. I think I first became fascinated by Egypt and the curse of King Tut through an issue of National Geographic (the sponsor of the Toronto exhibit!!) when I was a young girl. My grandparents were huge advocates of higher education and always had subscriptions to NG. When I'd stay with them (which was most weekends), I'd hunker down while they watched the news and read about human evolution, the natural world; however, the one issue about King Tut always stuck in my mind. As a teenager, I got really into wearing ankh earrings and scarab jewellery. This post is a sort of natural progression of that historical and aesthetic interest; Nowadays, I'm even more interested in how Howard Jones's 1922 discovery of King Tut's tomb affected Western culture so significantly that the worlds of fashion and beauty were never the same again. My favourite images are the 1920s Palmolive ads below that show women tapping into the ancient Egyptian princesses' secrets of eternal youth, emerging from mummy-like wraps to reveal timeless rejuvenation, etc. Of course, they also seem to be picking up on the Queen of Sheba image (perhaps inspired by Betty Blythe in the 1921 film [which is what is being advertised in that first pic below]). When you really think about it, the facets of hair and makeup one typically associates with the 1920s "flapper" look were very much influenced by Egyptomania. The dark and dramatic eyes, the headbands, even the Louise Brooks bob (although I understand that style was called the 'Dutch Doll'?) are very Queen of Sheba/Cleopatra. I even read somewhere that the 1920s bridal headband/veil look (such as my great aunt wore on her wedding day in the pic I posted yesterday) was inspired by the egyptian fad. Now, the discovery of King Tut's tomb did not singlehandedly create these trends, but it certainly further amplified this craze. Images below show 1920s performers sporting perfect examples of the influence of the East on feminine ideals of beauty and sexiness at this time (their hair length is more baby vamp, though). Images from Art Deco Lamp site. Click HERE if you're feeling bored and want to make your own Art Deco head-dress (albeit out of paper):). The company Boudoir Queen has their own GORGEOUS Egyptian revival headpieces if you want something a little more Sheba-worthy. For the 1920s gals more inclined to wearing clothes, textile and clothing designers fueled and catered to the desire of many women to look like the Queen of Sheba. Below is an awesome image from the Smithsonian Institute's flickr feed, of a hieroglyphic printed silk. GORGEOUS. Next image is of a 1920s Jean Patou dress from the V & A's collection. SWOON!; Third image is of a 1920s dress posted on the Vintage Fashion Guild Forum page. There are more images of egyptian-inspired dresses from the 30s, 40s, and 50s on there as well! Next, an example of the vintage reproductions Leluxe Clothing makes of 1920s egyptomania dresses. Finally, it is taking so much willpower not to purchase this UNBELIEVABLE 1930s egyptian motif knit sweater currently for sale in Fab Gabs's Etsy shop. Just unbelievable!
Check out the Vintage Textile gallery for more 1920s egyptian revival items. Be prepared to SWOON! For accessories (and vessels to hold one's personal treasures), my favourites are some of the egyptian revival pharoah and scarab flapper beads and the jewelry box I spotted on Etsy. (pharoah beads from EsseVintage; 1920s scarab necklace from VintageStarrBeads; 1920s jewelry box from Villadizuzu; 1920s handtooled leather bag from auntiecarriesattic 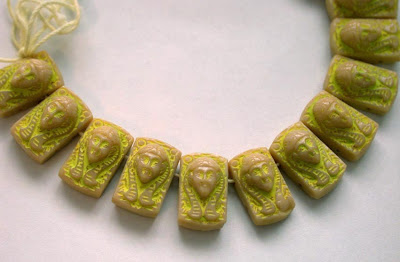 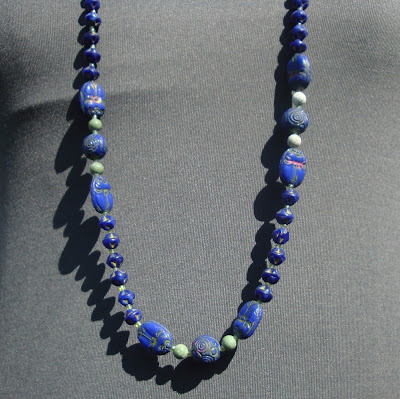 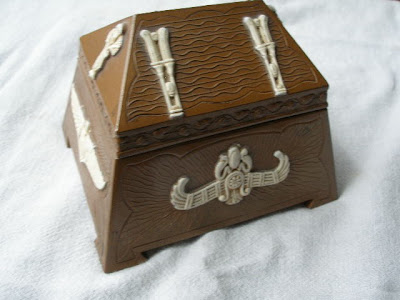 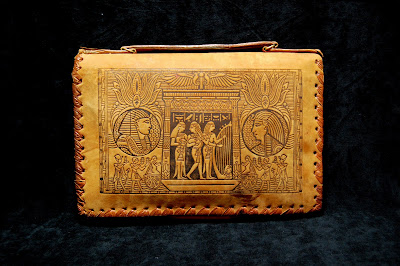 The gorgeous Jessica of Chronically Vintage did a great post entitled "Dress Like an Egyptian" back in May. Definitely worth checking out! Ditto on the fabulous Tales of a Retro Modern Housewife's post back in November.
Also an awesome article: "Watch Like an Egyptian" from 2008 Vanity Fair Magazine

Music I'm Listening To: You know I HAVE to do it: "Walk Like an Egyptian," both the original Bangles version and the Puppini Sisters' cover; also, "Leila, the Queen of Sheeba," by the Dolly Dots. "Sheik of Araby" has a bit of "Far East" flair.

Tired of Egyptomania? How about Phoenix's "Lisztomania"?
Posted by BaronessVonVintage

I've been wanting to go to Egypt since i was little. I've read lots of books about egypt. Someday i hope i'll be able to go. If i win the lottery or something. So much to see so it would have to be a long stay

Wonderful post!! I really do need to get some vintage scarab jewelry!!

HOW have you managed not to buy that sweater, it's gorgeous!
I love, love, love those headbands, they are so beautiful and it would be something that i would wear out in my twee village to make them think i am even more crazy! xx

Those items are gorgeous. It would take willpower of steal not to get that sweater if it's your size.

oh dear, don't tempt me ;) I really enjoyed "digging up" the little images and facts, but fear the post went on and on too long. Thanks for following to the bitter end!!

Oh, Betty Lou, my sister in law went and said it was indeed mystical to visit the pyramids. Some of the other aspects of the trip were the opposite of enchanting, though. I have never been so it remains a place of tantalizing mystery and wonder....

Stef, you MUST rock the headbands in your "twee village." I'll do it if you will....double dare!