Ever since first hearing of the upcoming Baz Luhrmann filmic adaptation of The Great Gatsby (in 3D, no less!), I've been trolling the internet for some costume sneaks.  After all, Fitzgerald did take pains to describe the clothing of his characters and fashion has symbolic function in the novel.  My eagerness to see how the costumers would approach the 20s clothing mentioned in the book paid off the other day when I finally found a couple of snaps showing Toby MacGuire (Nick Carraway) and Leo Di Caprio (Gatsby) in their Gatsby garb--well, almost. I take it Toby's sneakers won't appear in the final cut!  Anyway, I can't wait to see what the ladies will be wearing, esp. Josephine Baker. 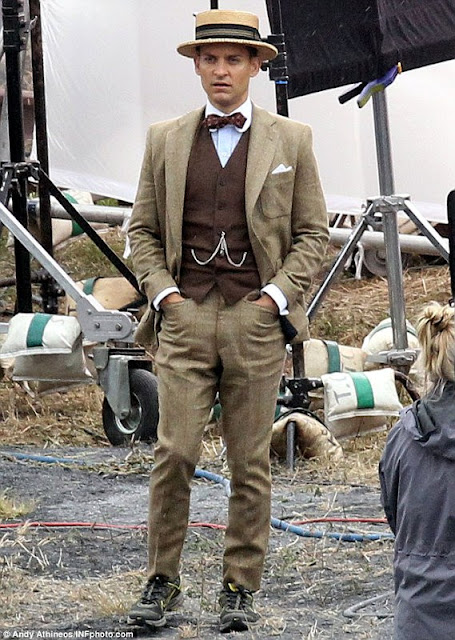 "Recovering himself in a minute [Gatsby] opened for us two hulking patent cabinets which held his massed suits and dressing-gowns and ties, and his shirts, piled like bricks in stacks a dozen high.
“I’ve got a man in England who buys me clothes. He sends over a selection of things at the beginning of each season, spring and fall.”
He took out a pile of shirts and began throwing them, one by one, before us, shirts of sheer linen and thick silk and fine flannel, which lost their folds as they fell and covered the table in many-colored disarray. While we admired he brought more and the soft rich heap mounted higher — shirts with stripes and scrolls and plaids in coral and apple-green and lavender and faint orange, and monograms of Indian blue. Suddenly, with a strained sound, Daisy bent her head into the shirts and began to cry stormily.
“They’re such beautiful shirts,” she sobbed, her voice muffled in the thick folds. “It makes me sad because I’ve never seen such — such beautiful shirts before.” 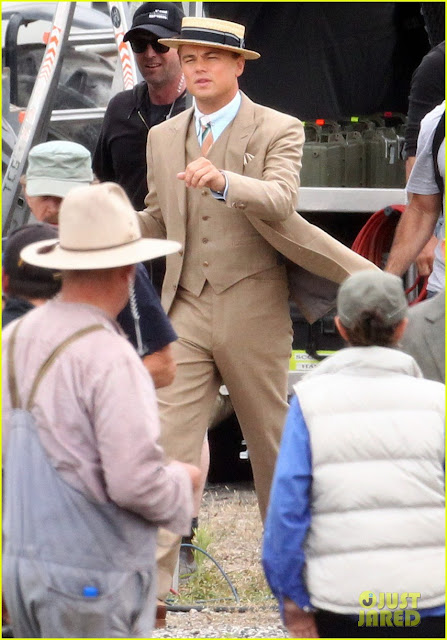 oh my- you know, I've never read Gatsby, but I certainly should,and the passage you've quoted here definitely inspires me to get on it!

Looks like it's going to be good! I do hope they release a non-3D version. I will not watch 3D films!

These two stars look very dapper in these lovely outfits. Looking forward to seeing and hearing more about this production.
Maureen

It looks good but I think it couldn't be better than the eternal classic Great Gatsby starring Robert Redford;)

Hm,I can only hope this is going to be better than the sickly adaptation with Robert Redford.

I'm ashamed to admit I've never read The Great Gatsby - now I don't know whether it's best to read it before or after seeing the movie!

I have never read the Great Gatsby, but it's on my book list. I may pick it up after I'm done reading "The Help". Right now I'm in the 30's with the Finch family.

Toby MacGuire as Nick Carraway? The person we're supposed to trust? Wah wah...haha I am not a fan.

Leo though, absolute perfection for the role! I am so excited to watch this, The Great Gatsby gets better with every read.

Walking In May said...

I love the 1920s so can't wait to see what the ladies will be wearing! :)
May xx
http://walkinginmay.blogspot.com/

I love that passage from the book - it's always really stuck with me. Personally though, I'm apprehensive about the film. I like both Leonardo Di Caprio and Baz Luhrmann but I think it's just that I'm nervous because I adore the book so much. I'm not a fan of the previous film either. I much rather just delve into the book and leave all film adaptations aside. It seems almost silly anyway because the book is so visually rich and luscious in its words that I don't understand how you could possibly even NEED to translate it to film.

I'll stop ranting now. It's just that it's probably my favourite book ever so I get a bit sensitive about it.

I must admit I WANT this story to be resurrected, if only to hold a mirror to contemporary society (many of its themes are so relevant to today). Alas, I fear more attention will be paid to the surfaces of things in a 3D movie (oh, irony!) than the deeper social messages Fitzgerald was trying to convey in the first place. STILL, as a vintage fashion lover, I can't help but hope the final product will be some mythical blend of surface and substance!!! SIGH!

Baz Luhrmann made Shakespeare cool again, but I fear his Gatsby might be as awful as Australia and Moulin Rouge... Fingers crossed! x