Really, what I've been virtually living in all weekend (and what I'm wearing right now as I type this) is this very cool early 1930s one-piece cotton loungewear getup (the label calls it "lonjerie").  I initially thought they were beach pjs (and I've seen a 1932 picture of Carole Lombard wearing beach pajamas that were shorter like these).  However, it seems to me that these are also somewhat similar in style to the "kitchenette" one-piece pajama garment, the pattern for which I saw over at Decades of Style.  According to a 1930 advertisement posted by Painted Woman, really, the ideal footwear with such "loungerie" would be Daniel Green slippers.  Duly noted on my greedy gutserie list for next Xmas. The little lord really wanted to be in the pictures, so I let him make a fleeting appearance. 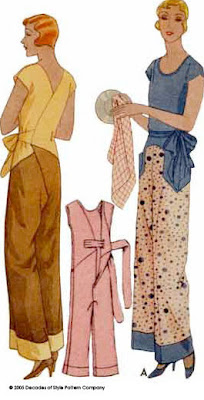 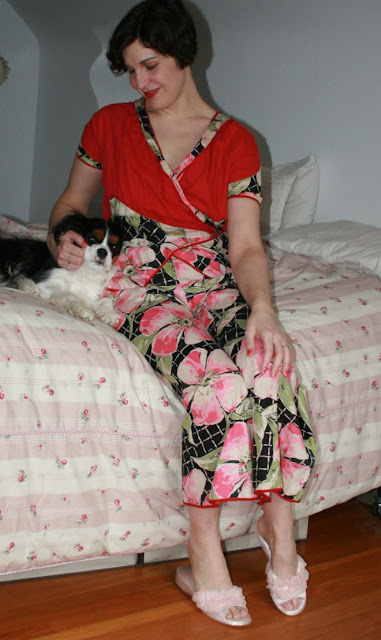 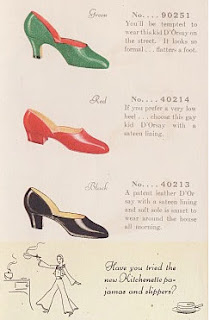 Oh wow those are fabulous!!!! And the little lord is adorable!

Talk about jaw-dropping. WOW. those are so incredibly rare! You are so cool.

you are both sooooo cute!!

Oh wow, always so glamourous, even in your 'at home' wear. That label is the best part for me.

I'm glad you let little lord make an appearance and what a little cutie! :) x

That's so cute, anything Carole Lombard wore you must be onto a winner! x

kitchen jammies! I ain't doin' any more dishes 'til I have some!

Those are *amazing*!! I am so impressed that even your around-the-house loungewear is a glamorous 1930s piece.

And my gosh, what an adorable little dog you have there!

You look just lovely in your 'lonjerie'!
Hope you had a lovely weekend despite the horrid weather!

well, I am flattered you think I look glamourous...I FEEL comfy in these! My little pup, Chance, sends his regards and love :P :P :P (those are meant to be cavalier spaniel licks/kisses)

So fabulous! And the little lord is adorable, too. :) I love the yellow crochet dress below.

So sweet! I'm loving it.

So cute! I just am in love with the floral/tropical print!!!

Oh wow. What a great find. So pretty!
-Andi x

What an incredibly awesome piece (and isn't your doggie just the most adorable thing)!

I recently bought a vintage pajama set and I've been wondering if it's really meant to be pajamas or more loungewear, but neither are really anything I know a lot about. However it's such a chic set (an Asian-inspired design, the top being white with red and the pants red with white), I've been wearing it around the house a ton!

Fabulous! This makes me want to go to the beach and lounge all day.

Looks like a great way to spend a weekend! I'm getting caught up on all your wonderful posts!

"Lonjerie" - I love it! Adorable little getup. Early 1930s pajamas and/or loungewear are adorable, but they seem pretty hard to find (in good condition, that is)!

What an incredible, unique piece of clothing! Wow! What a glamorous way to relax :)
Your little dog is darling :)
xErin

aw, thanks, everyone! it's definitely fun to wear and I certainly lucked out finding it!