I feel like I have been blogging more outfit posts than usual, but thought I'd share a couple of snaps of the outfit I wore to last night's St. Patrick's Day Dance Class/Practise Party, during which my mister and I had to perform a short waltz routine that we had only learned the night before. After class, we stopped in at our local little pub for a celebratory Guiness, looking very overdressed.  I suppose I could have gone the route of dressing like a leprechaun like some fellow dancers or pub goers, but I knew I would never have been able to fake a Ginger-like elegance whilst waltzing if I hadn't have been wearing something with fluttery bits, so, while I was a bit wary about wearing a cream vintage dress amidst people swilling green beer, I am glad I took this 30s rayon which I bought last summer out of storage and wore it with my re-mix green shoes and green cardi (though it wrinkled again shortly after I steamed it!).  I also temporarily swapped the dress's white buckle for the green one on that brown dress I posted about previously.  Although you probably can't see in these pics, I couldn't resist a little fashion fun by having my nails painted green with little lucky four leaf clovers put on each thumb. 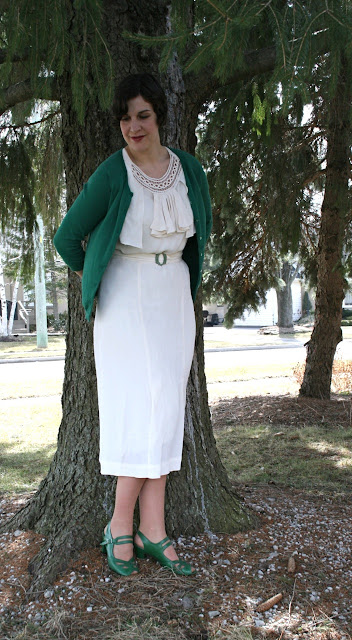 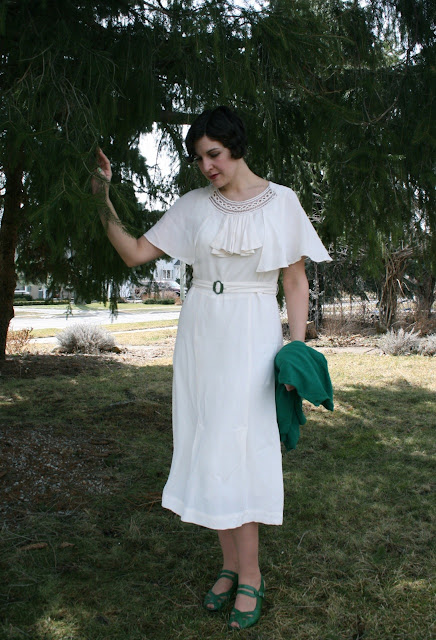 that's the kind of dress that would make my eyes well up if i ever came across it. and so perfect with the green, well done!

That is a gorgeous outfit! I love the little pops of green, and the buckle does tie it all together very nicely.

I don't recognize that pair of Remix shoes, they are lovely and remind me that I really need a green pair of shoes!

I love the second picture, you look like an angel! beautiful dress, just right.

I am swooning my lovely... you look utterly ravishing :D xx

kindest thanks, my lovelies!!
Tasha: they're the pepper green Rita shoes from Re-mix. I am in LOVE with them. I think they come in red and other fun colours, too, including a slightly different green (I like the Pepper green better). :)

what I love about this dress is that under the flutter sleeves, the armpit areas are open, so I felt less guilty about the idea of dancing in it (no underarm staining). Still, the dress was stained when I got it and since I knew I had successfully cleaned it before, I knew that if more stains emerged, I could give it another clean without having to dye it. Anyway, thank you again for your sweet compliments!

That dress is perfect on you! and with the green even better! I love your outfit posts :O)

Such a gorgeous white dress! I have never seen white and green to look so lovely together.

Such spring gorgeousness! Love those shoes.

my dear Baroness, never enough of your outfit posts for me. I gorge on them, as you nail it every time. Superb! and we want moooooooooore.

How lovely! The dress is so feminine! I bet it was fun to dance in. :)

I always enjoy your posts, but this one stopped me in my tracks. How perfectly lovely.
That second picture is art.

That dress is sooo gorgeous! I can just imagine how elegantly fluttery it must be dancing-- so very Ginger-esque!

The whole outfit is so marvelous !

That dress is so beautiful and ethereal!!
From Carys of La Ville Inconnue

oh my goodness. I am so flattered. Thank you ever so much for your kind words, everyone!!

The dress neckline is so pretty. Lovely pictures! :)

oh, lovely! the ruffles on your dress are just perfect!

loveliest dress. and i love that green cardi too.

I can't even get over how beautiful and perfect your outfit is! Gah, and those green shoes are killing me with their amazingness.

FABULOUS! I love this outfit!

Oh! This dress is heavenly! You were the Belle of the Pub that night, for sure. And all of the little green leprechauns fell madly in love. :-)