Joan Crawford's flouncy ruffled Adrian gown in 1932's Letty Lynton may have sparked this 30s fashion style, but it appears Katharine Hepburn's ensembles in 1935's Alice Adams fanned the flames of desire for such dreamy organdy confections. I watched this movie last night and must say I was charmed by it...in no small part due to how well a young Kate H. donned her darling girlish frocks!  Apparently, so were the Hollywood Patterns creators, because a *very* Alice Adams inspired gown design was released by them in the 30s.  At one point, K's character wears the most perfect little sailor dress...with an ascot and anchor pin that is pretty much identical to the look worn by Ginger Rogers in Follow the Fleet (1936)--looks like Bernard Newman copied Walter Plunkett? I also saw a real-life version of this same style of dress sold over at Posh Girl Vintage at some point.  WOW!  All in all, it was the perfect movie to watch while staying in bed with a sore throat.  Apparently, I woke my husband in the night with feverish jibberjabber that ostensibly related to me trying to describe the amazing flounces and bows on Alice's costumes. YIKES! 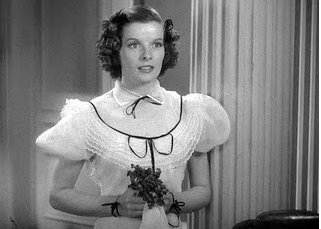 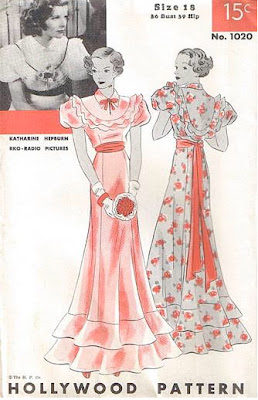 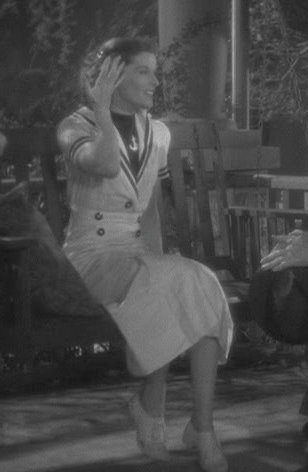 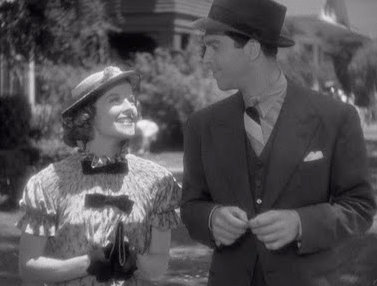 Dreamy! Especially love that sailor outfit. I never realized it was an anchor pin on the ascot (refering to Follow the Fleet, I haven't seen Alice Adams) - I always assumed it was embroidered on. Hmm, one more reason to buy more pins!

Oh, maybe it is an embroidered one. The one on Alice seemed like a pin (but hard to tell??)

Lovely! I must see this film now the costumes look amazing. I hope you feel better soon. x

These are beautiful, I love the nautical style dress!
From Carys of La Ville Inconnue

hahahha! Awesome - only you dream of flouncy dresses!! Cute!

I can't believe I haven't seen this movie! I just added it to my Netflix queue. I just adore Katherine Hepburn and the clothes look amazing!

Vintage fashion is my fav!

I love all the feminine, romantic bows and on 30's fashions. I think they would probably look a bit too cutesy on me, but it's a perfect look on young Alice Adams...

love the 1st one and the sailor one,thanks for posting!

I don't know why but I just can't stand Katherines face. The dresses are amazing though!