Elfin Fashion, Art Deco Pixies, and a hat for a Sophisticated Gnome

Before the costumers for Harry Potter borrowed design ideas from 30s fashion for their wizardly wardrobes, 30s design drew from the elves, pixies, gnomes, and other creatures of the mystical realm  Examples: 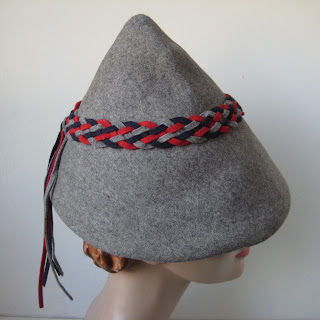 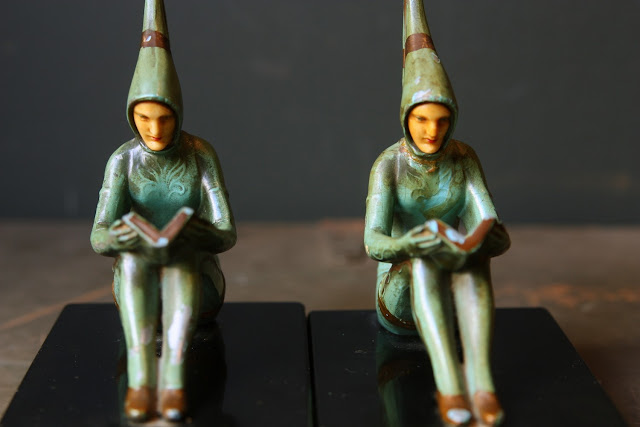 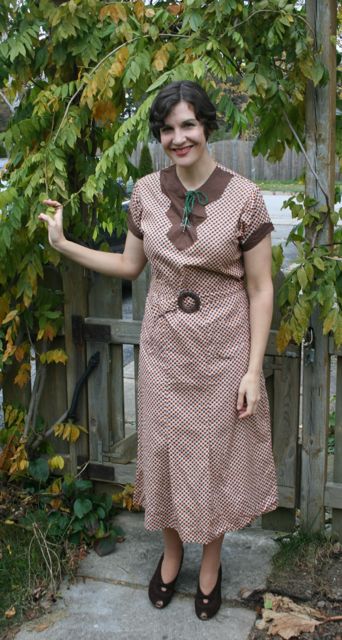 1930s dress with elfin (or is it Robin Hood) inspired details: Etsy. In case you're wondering why I was grabbing at the Wisteria in that manner, I was pretending to be Jill and the Beanstalk.  Husb. thinks I looked more Keebler Elf or Elf from Santa's workshop.  Great, now am worried about wearing this dress out in public, as may be told to get back to work at North Pole (or local mall).
(does anyone know what caused the elvish "trend" in the 30s? Is it an extension of the Robin Hood influence re-ignited by the Erroll Flynn film? Perhaps I'm mistaking one for the other?).
Posted by BaronessVonVintage

Love your dress! You don't have to worry about being mistaken for an elf. Lol! It's so cute and not screaming "North Pole" or "Keebler" at all to me!
I totally have a thing for pointy hats :)
You're right- Robin Hood had a huge deal to do with it! In a lot of my magazines they're called "Robin Hood" hats.
Maybe a stretch, but possibly the Tyrolean thing had something to do with it, too? With all the old fairy tales and whatnot. Totally a random guess though, and probably no basis in reality ;)

Unrelated to this awesome elf-inspiration post, but I just wanted to say I love your hair :)

I am not sure, it would be interesting to look into though. It does make sense for people to have been interested in fantasty and etheral beauty and that whole element of whimsy and escapism - it fits in so well with the times (for those in areas unaffected by the depression obviously). Then of course fairies were also very popular with artists of around that time or just before, like Arthur Rackham and Cecily Mary Barker and Kate Greenaway.

Cute! Could be Errol Flynn, Arthur Rackham, Maxfield Parrish, or all of the above!

I love your dress! I'm with Lauren: it doesn't look too North Pole or Keebler-ish to me. ;)

I second Lauren on the origins. I think it's less to do with elves and more to do with traditional German folk costumes which were extremely popular with Hitler's rise to power in the 30s. He promoted the look of "Das Folk" and so you'd see a lot of Tyrolean influence which can look "garden gnome chic" at times.

thank you all for your interesting fashion history info! Fascinating!

Oooh, great dress. I've got a pattern for a sweater that has lacing down the front and made me think Robin Hood (though I agree with Lauren et al on the thoughts of the influence) - I want to knit one up and get a little pointy hat to go with it. Haha.
-Andi x

Seems like the front lacing detail was a popular one in the 30s: I've seen NRA era dress patterns with this and I have a knit sportswear sweater from about 1933 or so with the same lacing as well. Definitely, you need a pointy cap, Andi! My outfit felt so incomplete without it! :)

I love the dress! There was a big medieval carry over at the end of the 20s and in the early 1930s, sort of a last gasp of Arts and Crafts movement influence, and I think that is part of what influences what you are seeing here.

I don't think you look like an elf, you look really cute though! And I love the gnome hat too but I'm not sure how well I could pull it off, I think I would look like Santa's elf! x